How do we serve the snaps?

– Ice cold in small tapering glasses or dram-glasses (see picture a little further down to the right).

And how do we sing the songs?

– Merrily, unless the chosen melody requires otherwise. For instance the song ”Oh what a wonderful evening” (Booklet 1) should be sung with deep, almost exaggerated feeling.

Melodies: For the traditional snaps songs and those with typical Swedish melodies we give you the music. In the other cases we suggest a tune that we hope is familiar to you.

Copyright: We give you the right to copy songs from our six booklets for your own private use. When you throw a party we suggest that you copy some songs on a sheet of paper with suitable illustrations and put them at the covers of each of your guests.

Thus we help you to have a good time and you help us to spread the Swedish Snaps-Song Tradition throughout the World.

Have a good time!

IF YOU’RE APT TO SOMETHING NEW

If you’re apt to something new

This is what you ought to do.

You ask for some liquor

You chill it until it’s

Cold and sound, then gather round

Sing a song and take a snaps.

And if all is rightly done

(Marskin ryyppy. The snaps of the marshal of Finland Gustaf Mannerheim)

Make your own liqueur

If you use fruit or berries making your snaps you might observe that as the juice goes out the alcohol goes in.

The fruits or berries therefore contain an amount of alcohol after you have strained them off.

If you mix the remaining fruit or berries with sugar and keep it for another week or so the osmosis will bring some of the alcohol and juice out and give you a nice liqueur.

150 appropriate ways of having a snaps

Have you ever attended a Swedish feast and witnessed the amazing transformation of the formal and grave, introducing and handshaking people into a happy crowd, enthusiastically and cheerfully singing and toasting?

Sweden has already provided the World with the smorgasbord and Absolut vodka and other brands of Swedish aquavit. But we forgot to enclose the operating instructions.

Like many other people, Irish, Germans, etc we like to sing when we are having a good time. But we are a little bit shy. In Sweden we also like to have a snaps, a small glass of aquavit (or two or more) with the smorgasbord or with the first course of a meal. Before taking the snaps however we feel an irresistible urge to sing a little song, a snaps song — the perfect way to start a party.

Thus we have created quite a treasure of snaps songs, usually short texts meant to be sung to melodies well known to everybody, though some songs, for instance the Mother of them all ”Helan går” (Now for the First) have their own traditional melodies.

You too can sing the snaps songs — in English...

I and my friend Göran Rygert, now living in Atlanta, Georgia, USA, have gathered 150 samples in English of this great tradition in six booklets. Some songs we have translated. Some we have interpreted and some we have simply written in the tradition of writing snaps songs. Here’s an example from Booklet 1:

1. NOW FOR THE FIRST

(The Mother of all snaps songs. By many incorrectly considered to be the Swedish National Anthem. Usually briskly sung as it is. Can also be used as a round for four parts.)

Now for the First!

And those who don’t the First one take

Now for the First!

takes the snaps and then continues)

In some cases, when I don’t think that the music is known outside Sweden the music will also be attached as JPG or MID files. If there is any of the other tunes you don’t know, just let me know and I will send it to you as a MID file to listen to.

Make your own snaps!

Many of the Scandinavian  brands of snaps are available outside Scandinavia but you can also make your own snaps by adding different seasonings to alcohol.

You usually start with plain unseasoned liquor, type vodka with about 40 % vol. of alcohol.

You can also use some other kinds of nicely smelling herbs like wormwood (Artemisia absinthium if you like your snaps bitter), the leaves of blackcurrant, bog myrtle (Myrica gale) or the blue berries of juniper (Juniperus communis). But make sure that the herbs you use are not poisonous!

Wormwood should be harvested in august when the flowers are yellow. Use the fresh flowers and small leaves or let it dry and use it later.

The methods are similar

The methods are pretty similar from case to case. You put an amount of spice seeds or leaves or whatever it is in a glass or china jar and pour liquor over it until it is covered.

For spices or herbs you should use liquor twice the volume of the herbs. If you use juniper berries, which in reality are small cones, you might have to add more liquor because the berries will absorb it.

As for lemons I suppose you could just cut them in pieces peel and all before pouring the liquor over but I use to peel off the yellow (not the white) skin with a sharp knife and put in the jar. Then I press the lemon juice over the skin and add liquor about four or five times the volume of the juice. If I want it dry I omit the juice.

Keep the jar in room temperature for a week and then strain or filter off the solid components and pour the liquor into a bottle. You now have got a concentrated extract that you can mix with vodka after your own taste.

If you want your snaps clear you should let the extract stand for a couple of months till the remaining solid parts have sunk to the bottom of the bottle and then cautiously decant the liquor avoiding the sediment.

When you have found the ideal mixture of extract and vodka, the snaps will gain in quality and you will gain in will power if you keep the snaps for another couple of months before using it.

Warning. Too much drinking will affect your sexual life and damage your health!

The Surgeon in General 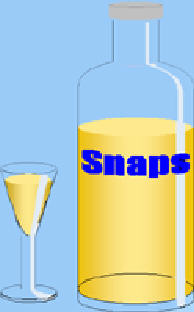